The Big Freedom of Speech Debate.

You have to hand it to the COALition: when it comes to denouncing double standards, they are champions.

Fair enough. Malicious bullshit is malicious bullshit, no matter who its author is or who promotes it. Censor one, censor all; otherwise, don’t censor anybody. The COALition scores a point.

Email ThisBlogThis!Share to TwitterShare to FacebookShare to Pinterest
Labels: Australia, politics, US

Gandhi or The Strange Case of Dr Peter and Mr Hartcher.

Standing on the shores of the Arabian Sea, Mahatma (the Great-Souled) Gandhi collected a muddy lump of salt from a salt pan. Then, as he raised his hand for all to see, he proclaimed triumphantly: “With this, I am shaking the foundations of the British Empire.”

Absurd as it may seem, that is exactly what he did. Some seventeen years later, the Raj collapsed and the British quit India. Gandhi’s deceptively simple act snowballed and inspired millions all over India.

Unions in Australia: Reality and Fiction.

After some fifty years of relentless “neoliberal” onslaught, unions still make a difference for Australian workers.

You don’t need to take my word for that. According to the latest ABS release on trade union membership, “median weekly earnings for employees who were trade union members in their main job were $1,450 per week”: $350 (or 32%) more than their non-union counterparts.

With only one exception (salespeople), that holds for staff ranging from managerial and white collar down to blue collar workers. Indeed, for community and personal service workers the difference is a whopping 60%. 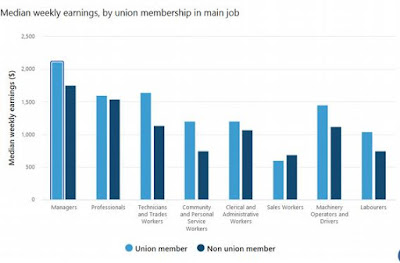