The COALition’s ironically titled “Ensuring Integrity Bill”, more appropriately known as Union Busting Bill, did not pass in the Senate, after the COALition bulldozed it in the Lower House.

Observers and pundits, as the COALition itself, were sure that abomination would pass (to be honest, so was I). Apparently, its leading promoter, the Attorney General and federal Industrial Relations Minister, Christian Porter, had even invited the press to a conference to crow about a victory they were already savouring.

Instead, Michele O’Neil (ACTU President) and the indefatigable Sally McManus (Secretary), after intense campaigning, had the last laugh.

Interestingly, today it was revealed that AUSTRAC, the Commonwealth financial intelligence agency, applied to the Federal Court to impose civil penalties on Westpac (one of Australia’s 4 largest commercial banks) over Westpac’s breaches of its anti-money laundering and terrorism financing obligations. 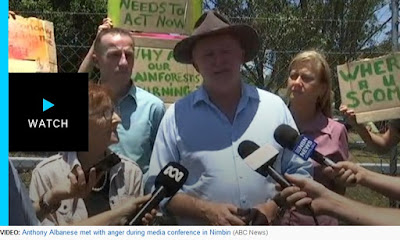 The still above is part of a short video (1 minute and 10 seconds) produced by an ABC News crew last Tuesday November 12. I reckon in its brevity it captures and describes with eloquence the situation Australia and the world is going through right now.

I will ask readers to watch the video, but before that, study that image carefully.

Have Peter Khalil and Anne Aly the Attention Span of a Goldfish?


What should pro-gun lobbyists say when a mass shooting takes place and the public demanded gun control laws?

Lars Dalseide, National Rifle Association of America (NRA) media liaison, taught his far-right One Nation visitors from Australia a tried and tested tactic applied successfully in the US in those situations:


Lars Dalseide: “ ‘How dare you stand on the graves of those children to put forward your political agenda?’ Just shame them to the whole idea.”

Steve Dickson, at the time One Nation QLD party leader: “I love that.”

Lars Dalseide: “It’s like, ‘If you, if your policy, isn’t good enough to stand on itself, how dare you use their deaths to push that forward?!’”

Is Earth Reaching a Tipping Point?


The Arctic isn’t a major concern to most Australians. I hope overseas readers won’t judge us too harshly for that: the Arctic is a long way away and we have plenty causes of concern closer to home:

A few days ago, Daniel Andrews, Labor Premier of Victoria, could not find more words to condemn climate change protesters. As quoted by the ABC’s James Oaten:


“Premier Daniel Andrews described the actions of protesters as ‘appalling’ and ‘violent’. ‘[Protesters] are free to protest peacefully,’ Mr Andrews said. ‘What they're not free to do is to act the way they acted. It’s appalling conduct, absolutely appalling conduct. Violent conduct.”

Words, too, proved insufficient when it came for Andrews to praise the Victorian Police for its performance: “I think police have done an outstanding job.” 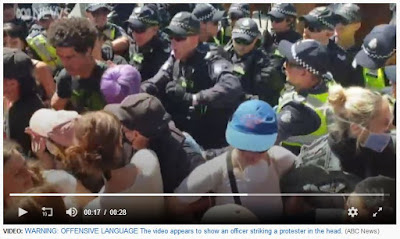 Observe the purple-headed woman in the screenshot above. She has her back partially turned to the Victorian Police officer who is raising his left arm (centre of the image). Indeed, the police are pushing her and other protesters away. She isn’t threatening anybody, least of all the officer himself. Note the fist. Go here to see the whole event developing (as the screenshot shows, a slow motion repeat starts at about 0:16-0:17).