“As we reconstruct our economy after the pandemic we have an opportunity to build a stronger, fairer economic framework that includes a credible and coherent plan on climate change and energy. In rebuilding our economy from the COVID crisis it is critical that job creation efforts also reduce emissions and keep Australians safe from the devastating impacts of bushfires and climate change.” - Michele O'Neil, President, Australian Council of Trade Unions

The ACTU, as part of the Australian Climate Roundtable, has issued the statement “Far-Reaching Climate Change Risks to Australia Must be Reduced and Managed”, among other things, calling the Morrison Government to adopt a net-zero emissions target for 2050.

Comrades O'Neil and McManus, keep up the good work! 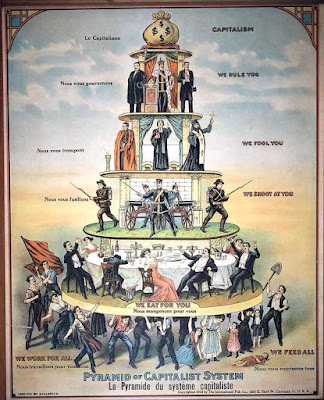 Have a good, detailed look at that picture. It represents capitalist society as a pyramid. Think critically about what you see. Take your time.

Believe it or Not: the Season of Fire.

It’s August and Australian winter is almost over. The 2020 fire season has already started. So far, however, we haven’t had any bushfires. Moreover, after an ominously dry July, this month considerable rain has fallen over the southern part of the continent and there’s even talk of a La Niña.

That is extremely lucky. With international borders closed/restrictions to travel and interstate borders closed due to COVID19, it’s dubious state’s rural fire services could receive any firefighting resources from overseas or even share such resources among themselves. That’s particularly true of heavy water bombers: the Commonwealth leases those aircraft from American and Canadian firms.


A flashback: a week ago, Prof. Adolph Reed was forced to cancel his speech before a Democratic Socialists of America event in New York.

If allowed to speak, it was expected that Reed would have argued that the American Left’s laser-like focus on identity politics (currently the emphasis is on racial identity) was counterproductive. It seems many within DSA – especially many blacks – disagree with Reed’s position. Instead, they opposed, to change that emphasis in pursuit of class solidarity was preposterous. Apparently Reed’s stance was “reactionary, class reductionist and at best, tone deaf”.

His stance was, in other words, anathema. And so they gagged him.

The thing is Adolph Reed (a well-known Marxist, in a country where it takes guts to call oneself a Marxist) is not only a distinguished academic, socialist, and long-time civil rights activist, he is also black.

The Road to Hell is Paved with Good Intentions.

Imagine a capitalist who, needing two new workers, publishes an advertisement asking for applications. After receiving 470 applications for the two positions, the capitalist feels disappointed. Unemployment benefits are to blame, the capitalist says, because they are too generous. More people should have applied.

What would you say about that person? Would it make any difference if the capitalist were skinny or bald?

Let’s add details. Although the capitalist pays the wage rates prevailing in the labour market for the two positions, that industry pays the lowest wage rates. Say, the legal, prevailing median and  average weekly wages in that industry are the lowest in the land. Would that explain why many other workers, perhaps less desperate than those 470, did not apply for those two positions?

Further suppose one were to reduce unemployment benefits or even eliminate them altogether, so as to increase the number of applicants, in accordance with the capitalist’s wishes. Would that improve in any way the situation of the 470 original and more desperate applicants?

That capitalist needed two additional staff. Let’s say another 470 applicants were pushed to apply for those two positions. Would him/her hire any more employees because the number of applicants doubled?

Let’s stop here. Think well your answers to those questions before going any further. Take your time.

As Seen on the Internet.


“Marx may be surprised to now learn that ownership of the means of production is not the path to riches in an internationally competitive market place at least when that production is located in the developed world. Off-shoring of production to developing world ‘work houses’ can however be very profitable.”