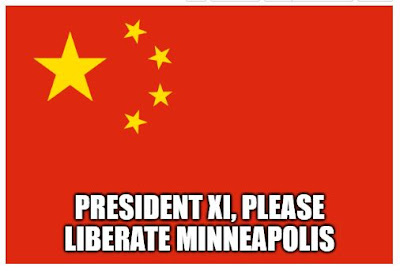 Westerners say that you are a dictator, but after months of protests, you didn’t send the People’s Liberation Army to the streets of Hong Kong.

Hong Kong protesters say the Hong Kong police is brutal, but at least Hong Kong cops do not murder unarmed people by kneeling on their necks.

Dear President Xi, is there a way you can declare the Minneapolis Police Department a terrorist organisation? Could you send Chinese police officers to train their American counterparts in human rights, discipline, and restrain?

I am sure Tim Wilson, the fearless libertarian freedom fighter, gay rights activist and MP, is already packing his pink T-shirt to join the protesters in the US.

Westerners also say press freedom is not respected in authoritarian China. These images, however, were not captured in Hong Kong, but in Washington DC, metres away from the White House, where the American President and leader of the free world, lives.
04/06/2020.

Today worrying news came that reporting crews from Nine Network (whose chairman is former COALition politician Peter Costello) were assaulted in London, in two separate incidents, as they covered the local protests sparked by the murder of George Floyd.

Go here to see their horrifying footage not showing the assaults.

Muslim protesters may have been involved. The reporters and their cameramen were unhurt.
Posted by Magpie at 21:49 No comments:

Email ThisBlogThis!Share to TwitterShare to FacebookShare to Pinterest
Labels: Asia, politics, US

Why Banks as Intermediaries?


Last time we saw that banks act as intermediaries between the Morrison Government and the Reserve Bank of Australia, Australia’s central bank. Although banks acquire the bonds the Government issues, the RBA is their ultimate purchaser. The banks, however, get interests for that.

The RBA could have chosen a different scheme. For instance, it could have funded the Government. But that’s not on, as David Taylor adds. Why not? What service those banks provide?

Let’s try to understand that.


In the previous post we discussed how COVID-19 changed the economic discourse about fiscal deficit spending. Here we’ll attempt to gain a deeper insight from that.

As argued previously, last March politicians, experts, journalists, and businesspeople muted their usual objections to large fiscal deficit spending. No argy bargy, no talking heads on TV formulating Very Serious (™) warnings. It’s almost as if the notions of inflation, crowding out and free markets had been magically forgotten.

Another usual stumbling block laid on the way of fiscal spending (namely the question “how will you pay for that?”) fared better, but only slightly. That I am aware, nobody seem to have asked that question when the measures were announced or when they were presented and approved in Parliament. Nevertheless, soon afterwards commentators began asking that.

Those commentators, I suppose, decided for belated consistency. Just like gloating sometimes can be justified, consistency can be fatally costly.


“Long-term unemployed NewStart recipients have been telling us how interesting it is that now that wealthier people — the people who are not ‘meant’ to be unemployed — are unemployed, that they’re getting all these concessions.

“That the Government can click their fingers and double the NewStart rate and waive now a lot of the punitive eligibility requirements.” — Jeremy Poxon, from the Australian Unemployed Workers’ Union, as quoted by the ABC’s Daniel Ziffer.


Although the sentence “I told you so” leaves the sweetest taste in the mouths uttering it, gloating is frowned upon. Too bad, for current events warrant MMTers the right to gloat.

More importantly, as Poxon’s example suggests, events seem to provide common people some of the insights MMT offers. In particular, that the zero-sum game of “responsible budget management”, where one’s gain necessarily comes from another’s loss, is a scam.