The shock of this latest Menindee mass fish kill distracted me from other matters. Apologies to readers.

In the beginning God created the heaven and the earth. (Genesis 1:1 KJV)


With those words, Bill Anders, lunar module pilot of the Apollo 8 mission, began the crew’s Christmas Eve 1968 message to the peoples of the Earth. That blue and white sphere, so beautiful and tiny and delicate, emerging from beyond the grey and lifeless lunar horizon, greeted Apollo 8 as it finished its flight over the dark side of the Moon.

Anders himself took that photo.

Water and Death and Fire.


What that photo shows is not scum floating on the water. It’s small fish, dead.

Witnesses to both events give their impressions:


“This is likely worse than the last time,” said local Graeme McCrabb, who on Monday morning was down at the water’s edge at the back of the township, above Weir 32. (here)

“What we are seeing is probably the last lot of fish that are here now,” he said. “There will be none left.” (here)

Frankly, I’m lost for words. We may have seen how a river dies.


Maryanne Slattery and co-author Rod Campbell, for The Australia Institute, released a week ago a paper structured as a question and answer session about the Menindee environmental catastrophe. Regrettably, their release was given scarce media coverage. I could find only Anne Davies’ brief account (January 19).

… And that was Then.


Do you remember the table showing new temperature records from the previous post? This table:

Australian Extreme Heatwave: this is Now …


The weather news in the last few days before Australia Day:

In the same note: informal reports of mass death of camels (!) near Docker River. Both brumbies (feral horses) and camels are introduced species.

Tim Clancy, from the NT Department of Environment and Natural Resources, said that according to the latest data available, there could be up to a quarter of a million brumbies in Central Australia. Although charismatic among the public, brumbies cause significant environmental damage, particularly during droughts, when they concentrate around waterholes, contributing thereby to erosion and damages to the vegetation.


I wasn’t aware that last year South Australia had a State-level Murray-Darling Basin Royal Commission. It’s due to formally report no later than February 1.

It is expected the report will include “adverse assessments of many governmental decisions and processes”. After being urged by Walker to publish the report immediately after delivery, AG Chapman did not guarantee a publication date, causing concern among SA-based politicians. They fear the SA Government could delay the publication of the report until after the NSW State elections, scheduled for March. Gladys Berejiklian (National-Liberal Coalition) is the incumbent NSW Premier.

PM Scott Morrison is touring Australia’s Pacific neighbours Fiji and Vanuatu, to kick-start bilateral talks with their governments. An unusual move for an Australian PM, it was prompted by concerns over the expansion of Chinese influence in the South Pacific.

Traditionally, Australian governments have followed a more charity-like approach in their attempts to foster goodwill (or project soft power, if you prefer) among our poorer neighbours. Historically, this took the form of international aid and/or disaster relief. As the Commonwealth cuts international aid budgets, the idea now is to counter Chinese political and economic clout with small Pacific nations by more business-like means.


After a slow start, summer hit Australia with a vengeance. 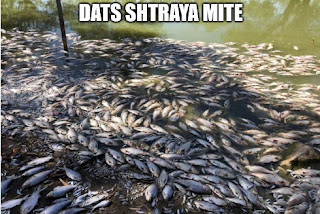 The man blabbered the official party line and that’s it. End of story. No mismanagement, no water over-extraction, no climate change, no nothing. Everybody did their best. That’s nobody’s fault. It just didn’t work.

Menindee: an Act of God?

Yesterday Federal Agriculture Minister David Littleproud met with the water “managers” of the affected states in the Murray-Darling Basin to decide what to do about this mess, report Carrie Fellner and David Wroe, from the Sydney Morning Herald.

Judging by Littleproud’s announcements, not much:


He said he’d offered NSW “any assistance it requires as it responds to these incidents, and to rebuild fish stocks when it rains” and announced $5 million for a native fish management and recovery strategy that would come from MDBA coffers.

Given the high temperature and luminosity prevailing in regional NSW, a new algal bloom is being forecast any time in the next few days. More mass fish death is predicted.

The Devil in the Details: Algal Blooms.


It is accepted that the recent mass fish kill in the Darling River was triggered by an “algal bloom”. But what on earth is an algal bloom?

Believe it or not, I think some basic, high-school level science could throw considerable light on the whole catastrophe, counter some misconceptions about it and offer valuable, if sobering, lessons for the Left.

The Darling River is no longer flowing for lack of water and what little water there is for human and non-human consumption is contaminated with masses of rotting dead fish.

Second in Less Than a Month: Mass Fish Death.


A second mass death of Darling River fish -- just reported by ABC News Online -- comes less than a month after the events of December 20th -- mentioned here -- and it appears to be of larger proportions. ABC News reports up to a million dead fish, versus ten thousand in December.

“Losing a Third of the Species on a Hot Afternoon”.


I try to keep up to date with environmental news. Yet, I missed this one:


Flying-foxes are crucial to keeping native forests healthy. They play an important role in dispersing seeds and pollinating flowering plants. Because flying-foxes are highly mobile, seeds can be moved locally and over great distances. (...)

High mobility also makes flying-foxes very effective as forest pollinators. Pollen sticks to their furry bodies and as they crawl from flower to flower, and fly from tree to tree, they pollinate the flowers and aid in the production of honey.


I stole the title of this post from an old Vangelis album.


The dramatic Queensland bushfires monopolised the public’s attention during a few weeks in late November/early December. That’s understandable. Events of such magnitude, where human lives and property are visibly at stake in our own TV screens, have a way to grab our attention. The media coverage was extensive.

At about the same time, however, the Australian media reported other events. Although I’ve discussed them with some friends, I doubt the wider public really noticed, for they didn’t receive the same level of coverage.