Introduction: Chile, Argentina and the Nazis

Initially, this blog was meant to provide a brief biographical profile of Walter Rauff.

However, the matter proved much more complex than expected. Even an schematic account of Rauff's life requires mentioning other names, general circumstances and historical episodes falling beyond the scope of a single blog.

For this reason, Rauff's still summary biographical profile will be split into several blogs, beginning with the present one, where a general historical setting is provided.

The previous blog in this series documented a tendency in Western bourgeoisie, “even in democratic cultures”, to find Marxism a greater abomination than Nazism. In the post-WWII era, an instance of this was the cooperation between American intelligence agencies and former Nazi Germany figures.

This is not to say that Nazi “expertise” was valuable only for American interests. It will be shown here that even the most unsuspected parties sympathized with and employed these “experts”.

What’s more, often this acceptance was not forced upon these “democratic cultures” out of an imminent fear of communism.

The journey starts in South America, making only passing references to Germany.

Chile and especially Argentina were developing along the lines of modern capitalism in the early XX century. Their economies, based on agricultural exports, attracted considerable foreign investment; additionally, Argentine capitals started light manufacturing, oil extraction and refining, while Chile had nitrate and copper mines.

Combined, increased tax revenue and a relative political stability allowed both countries to develop their capitalist class and its corresponding proletariat.

The development of a proletariat marked the beginning of trade unions and left-wing movements, which paradoxically threatened to disturb the relative political stability needed for capitalist development.

To maintain that "political stability" a number of governments in Western democracies tended to apply a "carrot and stick" approach whenever indispensable, and an outright hard hand, when necessary.

In the US, for instance, the period immediately after the October Revolution in Russia and the end of WWI was known as the First Red Scare. It shared some significant characteristics with most cases in other countries: the fear justified or not that trade unionism in general and Marxist or social democratic movements were immediate precursors for social revolutions; the use of prejudices against foreign workers, who were supposedly specially involved in those movements; police repression against trade-unionists and left-wingers and social unrest and violence:


In Argentina and Chile a similar scare manifested itself in ways perhaps more dramatic: 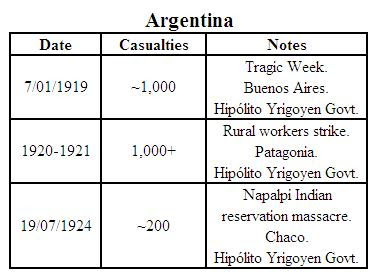 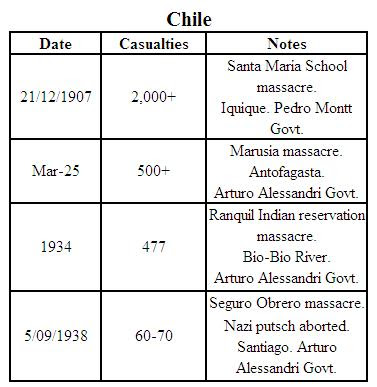 Some comments are in order.

That list is far from exhaustive, including only the best documented cases. (For details, see Reference, below).

In Argentina these massacres were carried out by the military/Police at one hand, and the Liga Patriótica Argentina (Argentine Patriotic League), a nationalist-Catholic vigilante militia supported by business interests. These actions were as much against the political left and trade unions, as against Jews (seen as crypto-Communists or Anarchist), foreigners, and Indians.

It is worth remarking that Marxism and Jews had been linked by right wing propaganda at least since the October Revolution in Russia. The following poster depicts the Jewish Leon Trotsky as a red demon, while at the bottom one can see the "Asian hordes of Marxism", leitmotifs that would be adopted by Nazism.

However, the Liga itself was never considered a strictly proto-fascist group, as they supported Presidential democracy. President Yrigoyen himself was a Radical: roughly a centre-centre left (liberal/social democrat), by current standards.

In Chile, however, President Alessandri could be considered centre-centre right (Conservative). As in Argentina, these actions were often anti-left/trade unions and anti-Indian/foreigner; but in the Seguro Obrero massacre the casualties were members of the far-right Movimiento Nacional Socialista de Chile (National Socialist Movement of Chile). In Chile the responsibility solely fell on the military.

As can be appreciated, there were groups in Government and in opposition, in both countries, with important, if partial, affinities to European Nazi-fascism. One of the clearest coincidences was their opposition to left wing ideas and trade unionism, which the Nazis themselves expressed immediately during their ascension to power with the opening of Dachau in 1933.

This, however, does not exclude the presence of groups opposing Nazi-fascism in both countries.

Politically, Marxist groups in both countries provide an example of opposition:


The telegram above, sent by 76 members of the lower chamber of the Chilean parliament in 26-11-1938 in protest for the Kristallnacht, reads:

"His Excellency, Mr. Adolf Hitler
Chancellor of the Reich,
Berlin.

"As members of different sectors of the Chilean Parliament and in the name of civilized life, we present our most vigorous protest for the tragic persecution of which the Jewish people in that country has been victim and we request that your Excellency make stop that state of things and re-establish the right to life and justice for the Israelites, as humanely and eloquently demanded by President Roosevelt."

Further, some Argentine researchers, without denying that sections of the Argentine dominant classes harbored sympathies for Nazi-Fascism, argue that these affinities were exaggerated by American authorities, due to their opposition to Peronism. [5]

Rauff will appear in the next blog in this series, treating with Chile and Argentina in WWII.

(*) The content of this section is largely based on Wikipedia and a range of other resources freely available; consequently no specific references will be given here, except those relating to the quantitative data contained in the table, which are detailed in the References section.

I believe those images to be in the public domain. However, if such is not the case and the reader holds the rights for these images, please let me know and they will be removed or credit will be duly given, at your discretion.

"The people have turned him [Che Guevara] into a myth, a great figure. But what has he actually achieved? Absolutely nothing"

Klaus Barbie, the Butcher of Lyon, murderer of 44 Jewish children.

Last night they were showing a doco about the iconic Che Guevara photo, taken by Cuban photographer Alberto Díaz Gutiérrez, professionally known as Alberto Korda. You know the photo:
During the film, pretty much the whole political spectrum had the opportunity to  speak about Che: from his Sierra Maestra companions to Gerry Adams and Jean Paul Sartre (all of which said good things about him), to rabid anti-Communist exiles in Florida (who said bad things about him).
As the opinions were quite predictable, only two commentators made an impression in me.
One was a young American. You know the kind: young guy, early twenties (probably a student), articulate, good-looking in a slightly effete way; the kind that never had to pick fruits in Texas a single fucking day in his life. For whom “hunger”, “poverty” and “disease” are merely abstract bullshit they read about in books; that is, if he actually ever read about them, because he looked like the abstract "liberty" kind of guy. Picture a young Liberal here and you are seeing the guy.
And, boy, did he express himself properly! You know, oozing self-confidence and knowledge.
The other was from some Bolivian Indians. Let's not fool ourselves, you also know the kind, so I don’t need to waste time: they simply looked miserable. I’d be surprised they actually could read and write.
Basically they were grateful, because for them Ernesto "Che" Guevara died trying to help them. And to show their gratitude, they pray to San Ernesto de La Higuera (Saint Ernesto of La Higuera). Some also make those kitsch saint images of him, for sale. So I guess in at least that way he does help them.
Frankly, I don’t know whether Che was a saint or a tyrant, a hero or a fraud. Perhaps a bit of each. Maybe he was wrong. I’m neither his advocate nor his judge. And what does my opinion matter, anyway? You, of course, are free to form your own opinion about him.
But, for me, the gratitude of those poor wretches weights infinitely more than any rational speeches memorized from a book by some American student, because it is those Bolivian Indians who, in their ignorance and naivete, in their misery, have earned the right to judge.
I allowed Klaus Barbie to express his opinion about Ernesto "Che" Guevara. As Guevara never had the chance to return Barbie's regards, I'll let someone else speak about Barbie and his achievements:

"After 19 days of interrogation, they put me in a cell. They would carry by the bodies of tortured people. With the point of a boot, Barbie would turn their heads to look at their faces, and if he saw someone he believed to be a Jew, he would crush it with his heel." Lise Lesevre

PHOTO CREDITS:
Posted by Magpie at 02:13 No comments: