Have you ever noticed how, according to newspapers, politicians or sundry pundits, everybody is wealthier, and yet, you seem to have difficulties making ends meet?

Well, I have. My first reaction was to question myself. But, in truth, although there was room for improvement, it wasn't enough to explain everything. After some reflection on the issue, I discovered that indeed something was wrong with those newspapers, politicians and sundry pundits.

And as regularly as I can, I will be publishing short articles about this.

You and I decide to go to this new chicken place, just around the corner, for lunch.

You are about to dig into your food, when the mobile goes off. "I've gotta take this call", you offer as explanation, as you go outside.

Five minutes later you are back at the table, but where's your food? It's gone! Neither chicken, nor chips, an empty plate, a small plastic plate, next to, where you see a bill, a $20 note and a couple of coins.

"Well, we had one chicken and we're two. So, on average, each of us had half a chicken. You pay for your half and I pay for mine", I reply sheepishly, after finishing YOUR beer.

Now, before you rush to deny that you would ever fall for that kind of scam, I've got to tell you: I'm sorry, but you're wrong. There is a good chance that you have fallen for this, many times. If this is a consolation, you're not alone.

Let's talk a bit about statistics. Don't be afraid: it won't hurt a bit.

Imagine two islands: Patagonia and Utopia. Both have equal populations (say, 10 inhabitants each) and equal total incomes ($10, each island).

So far, you can't tell one island from the other on the basis of their total incomes, as they are equal.

Now we introduce differences: in Patagonia all income goes to one person (say, the other nine are slaves); while in Utopia the aggregate income is equally divided between the 10 inhabitants.

This information is contained in the table below. The first column is simply the individuals' IDs, and the second column is their individual incomes (one column for Patagonia, another for Utopia). 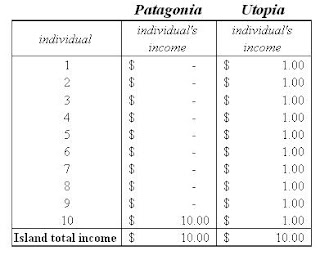 If you go through the trouble, you'll find that both populations have the same average income: $1 = $ 10 (total island income)/10 people (island population). Still, while in Utopia everyone gets exactly the average, in Patagonia no one gets it: most get less (nothing, in fact) and one gets much more (does this remind you of your half chicken?).

If you have followed up to this point, you can already understand this:

(3) Regardless, average measures of income (or wealth, or prices, or many other variables) are not good indexes. And they become more and more meaningless, the more a real case differs from absolute equality.

(4) There should be better measures of how your "average Joe" fares income-wise, one should hope. In fact, in most cases, there are such measures: the median income is an extremely simple one.

In our case, though, as we have 10 individuals, the median is the income of the 5th individual plus the 6th, divided by 2: $0 in Patagonia and $1 in Utopia.

This little table shows together the average and median incomes in Patagonia and Utopia:

So, whenever you hear someone talking about incomes (or wages, wealth, bank account balances, taxes paid, prices) you need to know more details. A general statement (say, "incomes increase") means little, obviously. The average quantity doesn't add much more either, as you can see in the Patagonia example.

That's when you ask: "Ok, that's all good and well, but what's the median?"

If the median is lower than the mean or average, as it is in the Patagonia example, you know that a few people are earning much more than others.

If, on the other hand, no one cares to inform you about the median, even though it's reasonable to expect that such information exists, you have a good reason to believe that there is something wrong with the information provided.

Half a Chicken, on Average?

I'm sure you have solved those spot-the-differences puzzles from newspapers. Let's see if you can spot where the information provided is faulty or misleading. The quotes below come from real-life official media releases, op-eds, or news stories:

"In addition, real wages have increased by 20.8 per cent. This compares with the 1.8 per cent decline in real wages recorded over the whole 13 year term of the previous Labor Government".
Media release. Department of the Treasury (The Hon. Peter Costello, Treasurer). 30/08/2007.

"Figures released last Friday reveal another dimension of this wealth explosion in terms of financial assets like cash in the bank, shares, bonds and superannuation holdings. Every man, woman and child has, on average, almost $60,000 worth of these assets after debt is accounted for - and this has grown by almost half in the past two years".
Steve Burrell. "We're all richer. We just don't realise it". The Sydney Morning Herald, page 18, 02/10/2007.

"Bureau of Statistics figures show net household financial wealth (assets less liabilities) hit $1.2 trillion in the June quarter, up 23.3 per cent over the year. Breaking that down on a per capita basis, the financial wealth of each Australian hit a record $57,400 at the end of June".
Nassim Khadem. "Personal wealth bursts out all over". The Age, page 3, 29/09/2007.


Now, you might ask: does it matter? I believe it does. Governments need to justify their decisions; bosses need to pretend they are fair. It's our choice to believe them on blind faith.

A further resource on basic statistics is:

Statistics Every Writer Should Know. A simple guide to understanding basic statistics, for journalists and other writers who might not know math.
Posted by Magpie at 01:04