Mark Twain, it appears, is an unlimited source of quotations, even if sometimes the quotations can only be tentatively attributed to him.

Regardless, the following is a pearl of wisdom:

"Per capita real net national disposable income grew by 2.6 per cent a year over the decade - that's the money in our collective wallets and purses;
"Our national per capita wealth (the national balance sheet, what Australia is worth divided by the number of people) increased by about 0.9 per cent a year.
"And, the real clincher against the whinging class, real average household income of low-income Australians grew by 41 per cent. The poor have become substantially better off, if the word 'richer' doesn't quite fit. Middle-income folk saw their after-inflation household income rise by a whopping 46 per cent."

Allow me to focus on these three items.

But first a note of caution: one must understand that journalists, even business journalists with long years of experience, are constrained by time: they have to abide by deadlines and are likely to have little time or inclination to fact-check the information they come across. In other words, it seems, is unreasonable to expect them to read "Explanatory notes" or any other such minutiae.

So, one may forgive Mr. Pascoe for not checking the notes referring to the third item above (the "real clincher" of 41% enrichment enjoyed by low income households).

Still, that's a shame. Had he opened just one link, he'd have seen the following note, and perhaps saved himself this rejoinder:

"The headline indicator shows a rise in the real income of low income households between 1997-98 and 2007-08, with their average real equivalised disposable household weekly income increasing by 41% over this period. However, part of this increase reflects improvements to the way income was measured from 2003-04 onwards."

Have a look at the chart below, reproduced here for your viewing pleasure. 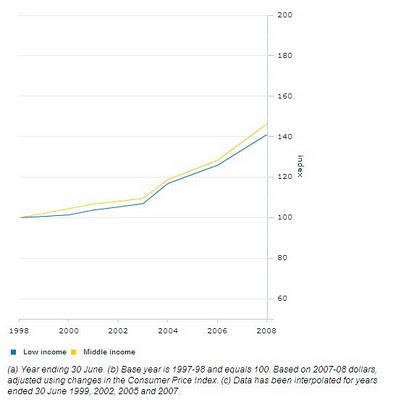 The jump in the data, in the 2003-2004 period, reflects the "improvements" mentioned in the paragraph above. You'll also notice that the "slope" of the curve changed in that period: I suppose now Mr. Pascoe would say that the whingeing class are getting richer, faster...

That chart was in the very first page of the ABS report on Household economic wellbeing. Is that chart (together with the accompanying text) that pushed Mr. Pascoe into the display of neoliberal triumphalism, reflected in his piece.

I'm planning to write, in the not-so-distant future, about these "improvements". For now, let's just say things that were there but weren't considered income then, still are there, but are now considered as income.

Mr. Pascoe's failure to notice the caveat put there by ABS can be blamed on a lack of time, and excessive rush. That's fine: he would have had to click a couple of links to find the warnings about that data.

However, his failure to notice that wealth and income per capita (or average) measures mean diddly squat (revealed in his comments about "our collective wallets and purses" and about our "national balance sheet" increasing 0.9% per year) is simply appalling.

Here he didn't even need to click one link and read. He only had to ask his Fairfax colleague, Mr. Ross Gittins:

"Next, more attention needs to be paid to changes in the distribution of income, consumption and wealth. That's because changes in the averages of each of those things can be misleading. If, for example, much of a rise in income goes to the highest income group, it's possible that the real incomes of people on lower incomes could actually fall without this showing up in the average."

If he had checked more thoroughly the material made available by the ABS, he might even have seen the following table: 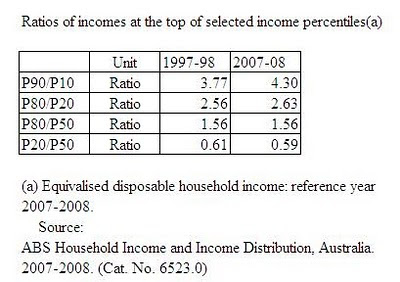 And, so as not to tire busy readers, the good folks at the ABS even provided the interpretation:

Perhaps, had Mr. Pascoe read this information, he'd have realized it's exactly what Mr. Gittins was warning against in the paragraph above!

In a future opportunity, he might want to try the website Statistics Every Writer Should Know, or even my own humble writings.

In any case, I feel perfectly justified to whinge, Mr. Pascoe, about neoliberal policies and about journalists who don't do their homework.
Posted by Magpie at 18:08